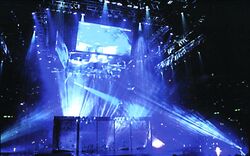 The stage was a complex "in the round" stage. The setup included multiple elevators, as well as a glass floor in the centre which was placed above large LED screens. Above the stage was a retractable unit which consisted of four screens facing different sides of the arena as well as four smaller screens beneath it. Throughout out the concerts, live footage as well as video backdrops/graphics would be displayed on the LED screens.
The set up also consisted of props including "cardboard butterflies", "rocking horses", as well as a fold-able "glowing ball". There were also many special lighting effects used in this concert, most notably the innovative use of green lasers which truly gave the concert a light/laser show feel.

The show started with Joey being raised by an elevator situated in the middle of the stage (this is to symbolize a music box figurine coming out to perform for only a moment- one song period meaning that StarLight will catch people's attention for a moment and making them want more). While singing "Mirage", the simple white/yellow lighting turned to a blue lighting theme with the large "unit of screens" being raised above the stage in the middle of the song. After the first song, she was lowered back under the stage while a dancer holding a torch "set off" a short fireworks display. Wearing a costume that looked like a fusion between blazer/workout tights, Joey came back out with her backup dancers to sing "Get Fit with Jane Fonda" and "Lucky Star". After, she did a quick on stage costume change where she changed into a puffy pink dress that went on top of what she was wearing before. She then sang "Timidity", "Love You More in this Minute", and "Beautiful Encounter". This part ended with an abstract animation of a cartoon girl going becoming an "insane" killer attacking people with bombs and tanks.

The second part started with police sirens and machine gun sounds as Joey and her dancers appeared on stage to sing and dance "Runaway". Here Joey performed her famous "tilting" move, but for the concert it was changed so that she did it while being lifted off the ground by her dancers. After performing the rearranged concert version of "Runaway" (which included a new dance sequence before last chorus) she performed "Joyful" and "Lovin' U" while shaking hands with the audience.

For the third part, Joey appeared on stage singing "Glow" in a "glowing ball". She then sang "Sob" with "rocking horse" prop. "The Big Yellow Door" came after as props came out of the stage like a pop-up book. After, she sang "Dawn" while green lasers made an innovative laser display.

The fourth part started with an eerie video displayed on the LED screens on the side of an elevated stage followed by Joey singing "Mad About You" with a mic stand and sexy movement. She then sang "Red Snow" and "Confession". After that, the mood was changed, four female dancers danced with Joey while she was performing "S.O.S.". Joey then sang Classic Medley, which consisting of ten of her famous "karaoke songs" (hit ballads) and came to shake hands with audiences again.

The fifth part had Joey sing and dance to a 20 minute medley, called Power Medley, contains her most popular fast dancing songs with all her dancers, including "Not Yet Know", "Grand on Stage", "Sing More and Stronger" and more. This was arguably the most talked about segment of the concert and the atmosphere was at its best as Joey put many effords in dancing. A large portion of the audience were standing up to clap and dance during this part of the concert to produce good atmosphere.

For the sixth part of the concert Joey sang "My Pride", "Grow Up with Me" and a song differed in every show. After these three ballads, she did another on stage costume change so that she could perform the last official song of the concert, a remix of "All Summer Holiday" and "Nodding Acquaintance", with her backup dancers to finish the concert.

Following the sixth part was an encore segment, which varied in duration and choice of songs for each show.

The stage for Part 2 was very similar to Part 1. There was a slight change in the shape of the stage though it seemed almost identical. The most notable change was that an even larger area of the stage was covered by glass. Another notable change is the screen above the stage.
Instead of the retractable unit of screens used in Part 1, this time the screens were placed together in the shape of a four-point star but did not move up and down.
Besides, the pop-up book props used earlier were not used as they were thrown out right after the concert because no one expected to hold Part 2 of the concert and instead they used fluorescent tubes shaped into a house and a large circle during that particular part of the concert.

The rundown for Part 2 was nearly identical to Part 1. However, Joey still changed several things to surprise audiences.

The stage for Joey's Malaysia leg of the tour was a lot more simple than the one used in the two Hong Kong legs of the concert series. Instead of a complex "four sided" (in the round/360 degree) stage, she performed on a much smaller "three sided" (180 degree) stage. The stage consisted of one set of stairs and a single elevator in the middle, as well as four metal columns. The lighting used for each song carried the same colour theme, but was considerably more simple.

The stage for Joey's North American tour was also a "three sided" stage but unlike the stage in Malaysia it also included a large screen which projected video backdrops and live footage, as well as six metal columns hung around the screen. While the stage win Toronto was larger than the one in Malaysia, this time there wasn't an elevator in the middle and Joey entered and left the stage using a flight of stairs at the back of the stage.

The show was generally the same as her Hong Kong gig, and the costumes she wore were the same as her Part 2 costumes. The only difference in the rundown was that she did not sing "Confession" or "Sob".
During the second night of her Malaysia leg, during the encore segment, she pulled a fan out from the audience which had a sign that asked if she could duet with Joey. The fan was so touched she cried and thanked Joey for making her dream come true. Joey then said that she was happy she was able to help her accomplish this dream and also made a joke, reminding the girl to join her fan club.

The rundown of her North American leg was changed even more from the rundown of her Malaysian leg. In Toronto they took out "Red Snow", "Confession", and "S.O.S.", replacing it with "Amen" and "On running machine". The last part of the show (with the fluffy dress and the pink + black + white sweater) became the "encore" segment, and for this segment of the show Joey took out "Grow Up with Me" but instead sang "Sleeping with Butterflies". In Toronto, Joey also came out for a second encore where she performed "16th Lover" as well as "My Pride" (which she told the audiences that she forgot to sing).

Retrieved from "https://joeyyung.fandom.com/wiki/StarLight/Synopsis?oldid=9987"
Community content is available under CC-BY-SA unless otherwise noted.