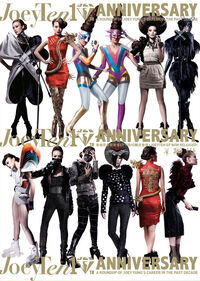 Joey Yung's 3rd EP released in 2010, Joey Ten, released with 9 covers. The covers mean 9 differnet images of Joey as a "Diva with a thousand faces" (with a microphone in each cover).

The idea is from classical composer, Beethoven and the Phantom of the Opera song. It use the image of a mysterious diva and she sings out her secret voice also. That's why the designer of the headpiece, Jay Chow designed the headpiece just like Baron Ashura, the one looks like men and women.

"Queen" is essential of the theme, "Diva with a thousand faces". However, wearing a glittering crown is not special enough. Therefore, the designer integrated the crown, make-up and hair style, using hair to replace metal and create this big special headpiece, creating the image Victorian Queen diva.

Inspired by the dynamic aerobic dance, whichever is dynamic and lively rhythm. With a giant shoulder costume designed by Petra Storrs, creating the image of a lively young diva.

This is modeled from the 60s and 70s lounge singers. "Dragon" in Chinese legend is miraculous animal. It is also a symbol of the emperor in the past. Therefore, some Joey's classical lyrics in Chinese style were embroidered on the back of the cheongsam. Plus the dragon and other elements, creating the image of a Eastern diva.

Everyone knows that Joey likes Miffy, so the designer turned the originally-planned bunny girl and white Chofy into all black. They also painted Joey in black body. Plus the rabbit's ears headpiece by Stephen Jones from Joey's own and a cross-styled microphone (represent the cross mouth of Miffy), turning Joey into a black Chofy.

According to legend, the Phoenix is an undead bird. It is generally described with red feather, so Joey put on the red showpeice created by Alexander McQueen, creating the image of the Phoenix diva.

This is typical of the exaggerated rock style, with a rivet of the avant-garde hard rock clothing, the image of rebellious rocker greatly subvert the people, as the diva has always been stereotyped as a feminine impression, creating the image of a strong diva.

It is modeled from female wrestlers, creating two diva/fighters would battle till the end. Joey wore the tight onepiece jumsuits, with the fighters' headgear. The wig was inspired by the recent rise in exaggerated hairstyle, becoming the fighters' unique weapon (霹靂扭花毒龍鑽).

Retrieved from "https://joeyyung.fandom.com/wiki/Joey_Ten_(EP)/extensions?oldid=6807"
Community content is available under CC-BY-SA unless otherwise noted.