This is the synopsis of the Hacken Lee & Joey Yung Live in Hong Kong 2015.

After an recording introduction by Jan Lamb, the overture began and dancers dressed like characters of the poker cards danced on stage. Joey and Hacken, represent as the queen and king respectively, were then lifted up and performed "Not Yet Know" and "請你早睡早起". After that, they stood on a rising platform and performed a cabaret remix of "Head Over Heels", while backdrop of burning fire was played underneath.

For "Runaway", dancers changed their outfit and went back on stage. Remarkably, Hacken tried out Joey's famous '45-degree' tilting move with Joey herself. The song was cut right before the final chorus and led to "嘭門". Hacken then went backstage and Joey resumed singing the final chorus of "Runaway". The choreography in this section was mainly the two arguing and fighting. The stage top has a number of large poker cards, with broken hearts as the picture.

Before the end of this act, two dancers (a male & a female, having Hacken or Joey's face on their cap respectively) had a sword fight, accompanied by the extended outro of "Runaway".

This act begins with an interlude by Jan Lamb again. After the pianist performed a short introduction, Hacken was lifted up and performed "Instant Breakup", in the male character's perspective. Right before the second chorus, Joey rise from underneath and sang "罪人", and the lyrics of both songs interchanged in the final chorus.

For "偷偷摸摸", a seesaw with three dancers rise. The blue and red light beside changed whilst the dancers were performing choreography on it. This was interpreted as the imbalance of a couple's relationship once an intruder gets involved in it[1].

Leading to "16th Lover", dancers with different numbers on their helmets, walked around the stage and had interactions with Hacken and Joey. The ones with number '1' and number '6' eventually toured together. Joey performed "我不會唱歌" on a small platform afterwards. She then walked away from Hacken and left the stage. Hacken then concluded the act by singing "Disfigured" alone. 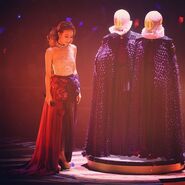 Joey appeared at the "Pluto" corner of the stage after another Story Telling interlude by Jan Lamb, singing "This Close, That Far". Chandeliers were descended from top of the stage. Hacken then joined Joey on stage and performed "Disheartened" together. For "情非首爾", Joey sang part of the lyrics from "Run away from You" during the chorus. At the same moment, a greenhouse-shaped cloth-strips prop landed on where Joey was standing, dividing the two more far apart[2].

During "愛不釋手", backdrops of burned out fire, sparkling fireworks and a old, leftover house were projected on the strips of cloth. While Hacken tried to enter the 'greenhouse', Joey left at the very same time. Hacken then left the house again when "Skylights" began. Words like 'It's time for us to break up.' and 'We are over.' was projected on the 'greenhouse'. Before the second verse, they tried to touch each other but Joey was lifted down. Hacken continued the performance alone. 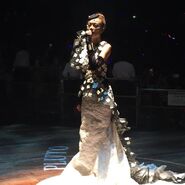 Joey was lifted up singing "Mad About You" emotionally after a dreamy, jazzy music interlude. While wearing a short bob wig, Joey represented the female character cutting off her hair after breaking up with the male character[3].

Then she started singing the first verse of "Splitting Bodies" in a cappella. When the original version began, 10 male dancers wearing a giant hat slowly approached to Joey. During the extended music break, Joey and the dancers performed a dramatic choreography to vividly demonstrated the song's meaning. Joey even knelt down during the last chorus, as if she could not take the pain of missing the male character anymore.

For "Get used to Breakup" and "飛花", blue and white laser lights were projected on her plain white dress. Afterwards she concluded this act by singing "Making Effort" with female dancers carrying umbrellas.

Chandeliers were descended from top of the stage. Wearing a similar outfit to the male dancers in the previous act[4], Hacken appeared and performed his classic "月半小夜曲". He sang "你最重要" while playing the guitar on stage, and covered Joey's "Pain Love" consequently. He rounded up this act by singing "大會堂演奏廳" with dancers fake playing violins, and left the stage while an interlude was being played.

The two appeared on stage again, singing "相愛很難" on separate rotating platforms. At the end of the song, the platforms stopped at the same direction. This created the scenario where Joey and Hacken met for the first time after the breakup, as described in "The World is Really Small". Hacken tried to hug Joey in the final chorus. Notably, special patterned lights hung above were descended and created signs like the infinity.

For "愛一個人", the lights were still being used and changed during Joey and Hacken's performance in the center of the stage. The two finally held each other's hands and sang "合久必婚". They walked around the stage, gave a speech about treasuring the people we love, and proceeded to singing "紙牌屋" as the finale of the love story.

After changing their outfits, Joey and Hacken reappeared on stage. They thanked the concert director, Joel Chu, and other crew members, before performing an entertaining medley of "Airport", "夏日之神話", "Joyful", "護花使者", "Grand on Stage" and "紅日" with the dancers.

They then received song requests from the audience and performed as many songs in half as possible. The concert was wrapped up by "Cannot Delay" while photos represented their long term friendship were played. 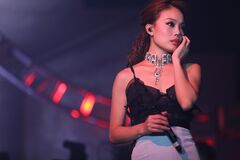 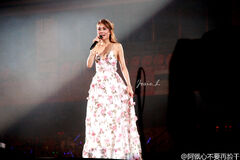 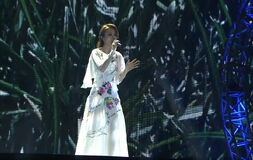 Foshan (Encore);
Dress by Burberry
Add a photo to this gallery

Retrieved from "https://joeyyung.fandom.com/wiki/JYxHL/Synopsis?oldid=13568"
Community content is available under CC-BY-SA unless otherwise noted.