The official live recording album of Hacken Lee & Joey Yung Live in Hong Kong 2015, which contains footage from the 10th, 11th and 12th shows, was released in 3 formats.

Initially, due to the two's respective record labels' copyright dispute, they stated the chance was low for them to release the concert in physical products. However, after much discussion, they finally decided to record footage from the last two shows in Hong Kong[1].

Before its release, Joey and Hacken often recorded the production process to hype fans up[2][3][4][5]. The live products were expected to be released in Christmas 2015[6][7]. 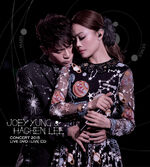 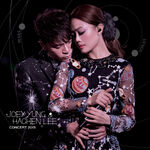 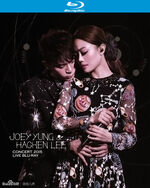 Retrieved from "https://joeyyung.fandom.com/wiki/JYxHL/Home_media?oldid=11003"
Community content is available under CC-BY-SA unless otherwise noted.