Joey had not revealed any details about the design of the stage before the concert started. Until the 1st show, the stage was finally shown. The stage contains a main stage plus two B-stages. The main stage is a circular built-up one with a orange ring, with a transformable house props hidden inside. There were also machines which released fire and fireworks around it. For the B-stages with a orange 6-angle star printed on, one will rise higher than half of the coliseum with white gauze attached under it; the other one could be split into half and be opened like a box. Linking the main stage and B-stages were orange small dots. Above the stage was a red circular display with 10 LED screens attached to it, assembling a 5-angle star. 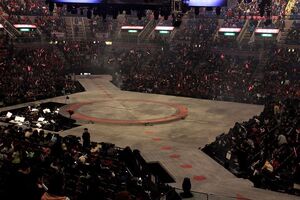 Unlike previous concerts, there was no introduction being played before the first song, "Little Day". Joey was being lifted in the middle of the stage with a small circular stage with light bulbs (assembling candles) surrounded it. Except the light bulbs and spotlight, the whole stage was dark. When Joey sang the second verse, green lasers appeared and the circular stage automatically turned 360 degrees.

The stage was lit up with purplish pink lights and the light bulbs went off stage when Joey was performing "Love You More in this Minute". In earlier shows, the whole center ring stage was ascended, showing the silver glittery curtain underneath.

The music of "Hug Hug" began after Joey gave a short speech about the concert. The rectangular house rise up and transformed while Joey was singing. After the transformation was complete, the whole main stage automatically rotated 360 degrees.

During "Get used to Breakup", the setting was the same. However, Joey would usually sit on a chair inside the house while singing. At the end of the song, the house transformed back to rectangular and descended to the main stage.

In "Disheartened", the set had blue lights while different patterns were projected on the stage.

This act began with an interlude with two dancers controlling puppets linked to their costumes, while colourful circles are projected on the stage. Another dancer who dressed like a bunny joined them and jumped around the stage.

One of the B-stages split into half and opened like a box, a pink miniplane ascended from the stage, along with Joey and dancer dressed like a pilot. "Home of Worms" was then began performed. The plane slowly moved to the main circle stage. In earlier show, Joey and the pilot would dance on stage during the final chorus.

Joey and the pilot held arms and danced romantically during "Chocolate Forever". The pilot then went back to the miniplane and did a handstand on it before he went off stage. Two Easter eggs, carrying two female dancers each, emerged from the stage after that.

Joey joined the dancers for "Joyful", walked and danced along the stage edges with pink lights. More female dancers later went on stage and finished the song.

The remixed version of "My Pride" began with its famous lyrics, "See Me Fly" and "I Can Fly". Joey and dancers performed a fun, upbeat, dance version of the song.

Another B-stage rise in mid-air, showing the white gauze underneath. A video interlude of mechanical patterns and images of the galaxy was projected on the gauze, with a slowed down version of notes from "Only You in the World", plus machine noises being played.

"Momoe Yamaguchi" was started when Joey ascended inside the gauze. Video footage of her performing the song was also projected on the gauze. She walked out of the gauze, to the main stage, during the last chorus. Pink lights were used on her path.

After giving a speech about how her mum helped her in her growth, and encouraged audience to record the performance for their mothers, Joey sang "Little Angel" emotionally. Blue laser lights were used to light up Joey.

The mood changed drastically when the drummer hit the beat of "Airport". Blue lights lit up the whole coliseum. Three guitarists went on the main stage before Joey came on the stage. Like Number 6, Joey played the guitar herself and performed the whole song. The rectangular house in act 1 rise for a low height, to life up four of them standing in each corner.

Joey gave a speech about how she loves the following song, but had never performed it live. A rock & roll styled "Honey!" was performed with Joey playing the guitar again. At the end, the four on the main stage had a mini jump together.

The six dancers from New York joined Joey on stage after Joey put down her guitar. They all danced to a newly arranged version of "Not Yet Know", while white and blue lights interchanged.

After Joey was being lifted down to backstage, the dancers had a solo dance showdown each and left the set.

Music of "Wallpaper" started this act. Wearing a long white dress, Joey rise from the center of the main stage. Different colours of flowers pattern were projected on Joey's costume, assembled Joey as a wallpaper, just like what the songs described, while Joey was rotated slowly during the whole song. At last, the patterns slid down to the stage, showing an image of a daisy.

"In Search of the Deities" followed tightly after Joey took down her headpiece and took off the white dress, revealing her black Mandarin gown. A blue themed whirlpool, which would reduce in size and follow Joey's path, was projected on the stage. Later a blue themed universe also projected on the whole stage.

Usually after giving a speech about keeping fit before the concert, "Haze" was performed. Randomly moving point lasers (in order of orange, blue, orange) lit up the main stage.

The act continued with "Skylights", when joey was elevated mid-air in one corner of the stage. A white sphere, which assembled the full moon, was lit up and moved near Joey. White lights shone out under the stage.

Joey ended up the act with "Beautiful Encounter", which Joey got close and shook hands with the audience under dark purple lights.

An interlude (with backing vocals from "View in a New Light") of two male foreign dancers performing seducing, sexy dance moves, started this act. Other dancers joined on stage before its end. "View in a New Light" began and Joey was rise to the stage. They danced to a newly arranged choreography.

A remixed version of "Head Over Heels" was performed. Fire was ignited around the stage while Joey and dancers danced on top of the not yet transformed house.

For "Peach Adventure", all dancers returned to the stage. The first lyrics was cut. Following the beat of the song, patterned laser lights were shown on stage. A dancer lifted up Joey on his shoulder while they were leaving the set.

A video mixed of Instagram pictures from #JY1314 activity was played on the screen, while Joey's backup singers performed "Lovin' U". Assembling a crystal ball, a plastic tent-like was inflated at a corner of the stage, with small snow mountains and fake tree trunks inside. Joey with a silver foil outfit and appeared inside the crystal ball, singing "The Big Yellow Door", while fake snows were blown out inside.

An interlude with dancers, wearing accompanying outfits, were rise on stage doing toy soldiers' movement. Joey did a quick change on stage and stepped out the crystal ball. After saluting the dancers, "Happy Happy" was begun and they all continued to dance for "On running machine", "Grand on Stage" and "Greater Vigor", as the fake ending of the show.

With different choices of songs for every show, Joey usually sang the fan favourite songs for this "Encore" section. Random lighting were used for different songs performed. For most of the shows, Joey chose "Pain Love" as the real ending of the show.

Like all of Joey's world tour, the stage was three-sided. Since then, there were 5 giant vertical LED screens on stage, showing live footage or new backdrops for several songs. In the Macau show, one more horizontal screen with lyrics and backdrop was added. Two separate signs of "13" and "14" were beside it.

In the US stops, no props originally used in Hong Kong concert was seen, since most props were large and expensive to carry overseas. In the Macau stop, the mini-plane, the huge moon and the inflatable crystal ball were used again. However, the mini-place was plain white, instead of sprinkle pink. The crystal ball was also empty inside.

As the show aimed at a wider range of audience, a few changes were made:

Retrieved from "https://joeyyung.fandom.com/wiki/Concert_1314/Synopsis?oldid=10611"
Community content is available under CC-BY-SA unless otherwise noted.